Freelance photographer Suzanne Paris has been on her own since she was fourteen—and she has no intention of settling down, especially not in a tiny town like Walton. She’s here to hide out for a little while, not to form connections. Her survival depends on her ability to slip in and out of people’s lives, on never staying in one place for too long.

But Walton is a town where everyone knows everyone else—and they all seem intent on making Suzanne feel right at home. She can’t help but feel drawn to this tight-knit community—or to the town’s mayor, Joe Warner, and his six kids. But Suzanne can’t afford to stick around, even if she’s finally found a place where she belongs. Because someone is looking for her—someone who won’t stop until her life is destroyed…

For those who love the canned romance scenario, this book is worth the read. But for those who are looking for something that isn’t predictable and has a little more meat to it, you’ll walk away disappointed. 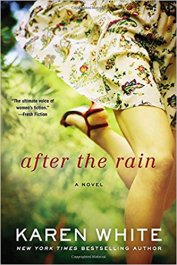 Cliche. That is the first word that came to mind as I got further into this book. It isn’t that Karen White’s writing is terrible; it’s simply that the plot is rather flat. A woman is running from her life, falls into a small town where within weeks, the entire town falls in love with her to the point of taking turns sitting vigil at her bed side when she contracts chicken pox. You don’t have to be from a friendly small town (as I am) to know it doesn’t work like that. Not even close.

The conflict within the story wasn’t engaging or suspenseful. There was no tearing up the pages to find out what happens next. As in all romance novels, you knew Suzanne and Joe were going to end up together almost from the first page. There was no real villain. Anthony, as the villain, had allegedly stolen photographs and beat her, but it was all revealed in passing. I would have been more sympathetic toward Suzanne if he was made more real to the reader rather than a extremely minor character. I never got the sense she was in any real danger.

There really isn’t much to say about this book. Again, if canned romance is your thing, definitely worth the read. But if substance is what you’re looking for, you might want to try something else.

Gather 'round and let me tell you a story... View all posts by K.E. Garvey

One thought on “After the Rain”