I read roughly 3-4 books a week. I used to review most of what I read, but I no longer have the time. I’ve thought about keeping a reading journal and simply putting out an end-of-year statement. It would probably be easier.

Although still an avid reader, what has changed is my reading preferences. As a teenager, I read mostly romances simply because that was what my mother enjoyed so they were readily available. But I tired of the canned plots and predictable endings, and moved on.

I enjoyed a ‘classic’ binge, comedy, mysteries, and finally suspense, which is where I’m at now. I tend to sprinkle a little of everything on my TBR pile, but read something dark about every other read.

Over the weekend, I finished reading, The Devil All The Time by Donald Ray Pollock. Wow… where do I begin? 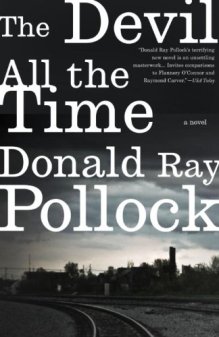 Set in rural southern Ohio and West Virginia, The Devil All the Time follows a cast of compelling and bizarre characters from the end of World War II to the 1960s. There’s Willard Russell, tormented veteran of the carnage in the South Pacific, who can’t save his beautiful wife, Charlotte, from an agonizing death by cancer no matter how much sacrifi­cial blood he pours on his “prayer log.” There’s Carl and Sandy Henderson, a husband-and-wife team of serial kill­ers, who troll America’s highways searching for suitable models to photograph and exterminate. There’s the spider-handling preacher Roy and his crippled virtuoso-guitar-playing sidekick, Theodore, running from the law. And caught in the middle of all this is Arvin Eugene Russell, Willard and Charlotte’s orphaned son, who grows up to be a good, but also violent man in his own right.

Since I ordered this book through Barnes & Noble online, I was only able to see the blurb, and not thumb through the entire book. It sounded as though it would be gritty, suspenseful, something I might enjoy. “Gritty” understated this book.

My last sentence might sound like a negative, but it’s not. First, let me say that the actual writing, take away the subject matter, was on point. Superb. The writing alone is an easy 5-star using Amazon’s ranking system. Content, however, will separate the men from the boys. Words like depraved, disgusting, disturbing, and depressing come to mind. Some people read, and take in the words, but aren’t so visual as to ‘see’ what they are reading. They might be able to read through this book and not be as hard hit as someone, like me, who sees what I’m reading played out, movie-style.

To say there wasn’t a happy moment in the book would not be an exaggeration. From the beginning to the very last page, it is as dark as tar. That isn’t a bad thing, if that’s your thing. I’ve come to enjoy a gritty story, but this one had a few WTF moments in it, even for me.

I suppose my biggest take-away with this read was more about the author than the book. Before I reached the end of the read, I had come to admire Pollock. He has no fear. He wrote a story akin to something you might see on a graphic true crime story, with maybe a  lot more shock value. He didn’t coddle his readers. He didn’t placate us with what we would normally expect from such a read. He rolled up his sleeves and wrote it his way. So many writers stunt themselves because they are afraid of how their audience will perceive what they truly want to write. Not this guy. He came at us full bore. I truly admire that.

As for the book, if you can handle the depraved, I highly recommend it. If depravity isn’t your thing, but you love a well-written work, again, I recommend it as it is one of the better-written books I’ve read this year. If you’re squeamish and Chick Lit is your thing…. keep it moving.

In Her Right MindJanuary 1, 2020
What happens when good people make bad choices?