Although I haven’t been posting reviews of the books I’ve read recently, my latest read demands a review!

Truely Noonan is the quintessential Southern boy made good. Like his older sister, Courtney, Truely left behind the slow, sweet life of Mississippi for jet-set San Francisco, where he earned a fortune as an Internet entrepreneur. Courtney and Truely each find happy marriages–until, as if cursed by success, those marriages start to crumble. Then their lives are interrupted by an unexpected stranger–a troubled teenager named Arnold, garrulous, charming, thuggishly dressed, and determined to move in to their world. Arnold turns their lives upside down–and in the process this unlikely trio becomes the family that each had been searching for. In the best Southern fiction tradition, Kincaid has brought us an inspiring story about finding the way home.

I sincerely don’t know where to begin with this one. I never read anything by this writer before, so I cracked the cover without preconceived notions. Anyone who knows me or follows my reviews knows how much I love southern fiction. Southern writers, southern stories, nothing I like better.

I felt the same lust for the story I generally feel when reading southern fiction. In the beginning. 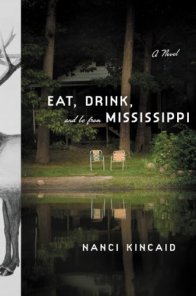 I hate to diss on a southern story, it almost seems blasphemous to me considering my love of all things southern, but it must be done. I wouldn’t recommend this title to anyone. Ever.

First, as I said, the beginning was very good. Also, and I know this will sound contradictory, but I enjoyed the writing. The writing is NOT the story. The story was terrible. First, in the beginning, Kincaid sets up the pacing and it works. The characters were interesting, their lives intriguing, and even though there were jumps in time periods, it followed the pace she had set up early on.

Then, all of a sudden Truely goes from having a wife that says “She’s addicted to him,” to being divorced with an ex-wife that had an affair, got pregnant, married the other guy/father of her baby, and has another on the way. There was no transition, not a single indicator that their marriage was even in trouble. That pissed me off. I felt cheated. How do you go from one scenario to the other without some type of transition? So from that point, I felt the story lost quite a bit of believability.

Next, Courtney has it all. The man, the affluent lifestyle, she and her husband have been reborn (and take it seriously), until they don’t. The whole born again thing lost credibility when Hastings (her husband) finds his “soul mate” in his assistant Meghan, and has to see where it leads. He promises Courtney that there will “be no divorce.” She accepts this by staying put, miserable as she is, while waiting for him to decide wether he will return to her or continue on with the mistress. In the meantime, she compensates with plastic surgery. Naturally, he lied and there is a divorce and he later builds himself and his mistress a new home – next door to his current and soon to be ex. Again with the believability.

Truely never struck me as the type to not only take in a juvenile delinquent, but almost by force. Arnold shows up on Truely’s doorstep unannounced, and never leaves. He’s nosy, rude, ignorant, presumptuous, and  obnoxious. As for his few redeeming qualities, sorry, but not enough to make him likable. So Truely, Courtney, and this kid Arnold sleep night after night in Truely’s loft – all open (no walls) and within view of each other. Hmmm. I don’t know any 40ish-year-old women who would be willing to do that.

*Um, yeah, if my boob falls out of my pajama top while I’m sprawled out like a contented cat, and you notice it, would you just slip ‘er back in for me? Thanks.

Truely rarely ever works. Yes, he is self-made and has many minions I’m sure. But his never working was unrealistic. Generally, the more successful someone is, the more they work. (Or as my father used to say it, “The more someone works, the more successful they are.”) Yet it seems Truely’s (and his sister’s for that matter) station in life is to simply be there for everyone else, no matter who it is.

Unfinished business. In the very end of the book, Gordo asks Truely to come to him. So he does. He tells Truely he wants to drop all charges against Arnold, and he does. But he says before that happens, he needs Truely to give his word on a few things. What were those things? Seriously, I’m asking because the author never followed through. Was I supposed to guess what they were? Is there a sequel coming that will address them? I hate when that happens.

Ya’ll or y’all? Is the spelling regional? I recently looked this up for a book I’m writing and learned that ya’ll is actually the correct way to write what means ‘you all,’ although y’all has become the more common of the two. That being said, I suppose which is used is entirely up to the author. But…. (you knew there was a but coming,) in the first half of the book ya’ll was used. OK, nothing wrong with that. But in the last half of the book, y’all was used exclusively. I suppose not everyone would notice that, or even care, but I did because as I said, I had just researched this point for my own writing. Forget what Meaghan Trainor says… it’s not All About That Bass…. It’s all about consistency. Pick one and run with it.

Heaven knows I found enough fault with this title to keep me from ever recommending it to anyone, but as I said earlier, it was not without merit. I believe Kincaid can write. Seriously, her style, her voice, all good. It was the story itself that I found severely lacking. The middle was bogged down with chapter after chapter of mundane moments among an unlikely trio. I kept hoping the book would redeem itself, but I was sorely let down. It didn’t even come close. If the last two-thirds of the book were half as good as the first third, this review would have read much differently.

In Her Right MindJanuary 1, 2020
What happens when good people make bad choices?